A superb day of Racketlon culminated with two epic World Cup matches that both went down to the wire. Great Britain edged out Denmark in the effective semi-finals for the second year in a row while Germany produced the shock of the day, knocking out top seeds Austria.

The FIR Nations Cup and FIR Challenge Cup both completed their group stages with fascinating storylines in both. Meanwhile, the Seniors Singles categories also took another step towards the respective finals.

The group stages began in a very routine fashion. Austria and Germany were the two fancied teams in Group A and duly obliged, both defeating Switzerland and the Czech Republic. It’s worth noting that both sides gave Austria a spot of bother at various points though.

In Group B it was a similar story. Great Britain and Denmark were the standout teams and both beat Sweden and France relatively comfortably. This left Austria vs. Germany and Great Britain vs. Denmark for the tile.

For Great Britain and Denmark this was the third major finals in a row that they would meet in the semi-finals. In the last two the match went down to the final tennis set and today was no different. Leon Griffiths and Kresten Hougaard battled it out in a high-quality affair. In the end, Leon’s consistency was strong enough to see him get GB over the line. A word for Luke Griffiths who, on his elite debut, won all three doubles matches and put up the best stats of the day in Group B. 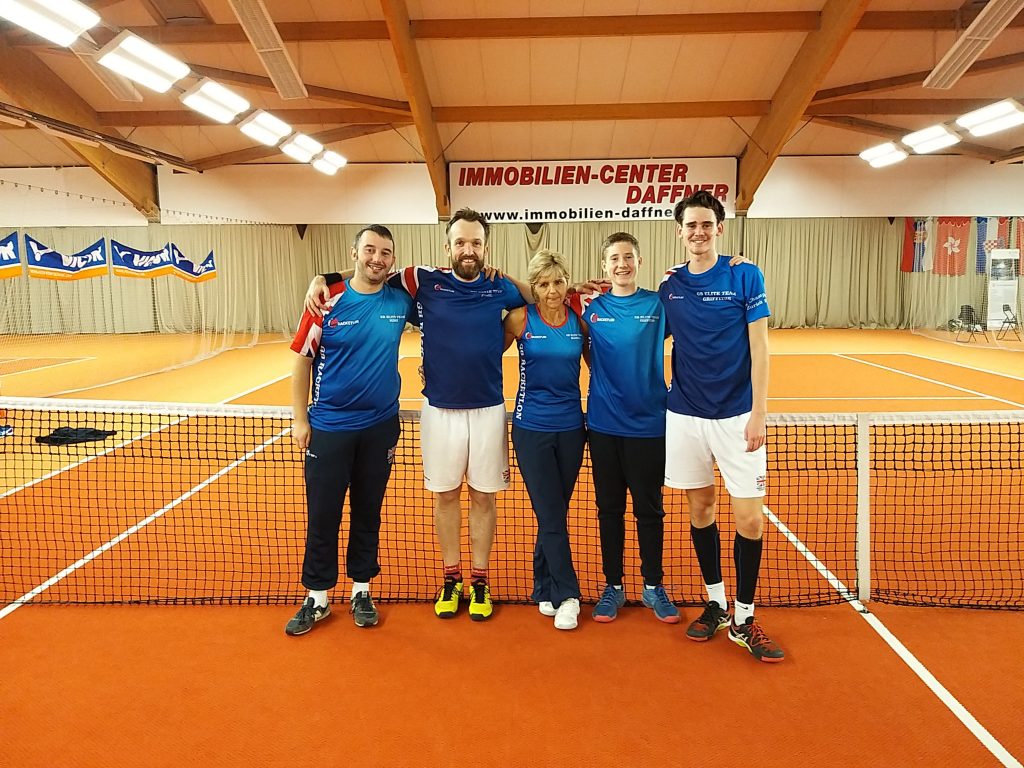 The match between Austria and Germany won ultimately won late on by a sensational tennis surge. Seven down with two tennis set to play the Germans rallied. Kanonenberg and Sach dismantled Schopf and Pilsz to reduce the lead to just one. Then, Germany’s star man Christian Wiessner overcame Stephan Schmutzer to lead Germany to a stunning win. This is the first major teams final not to feature Austria since 2015.

Great Britain versus Germany for the title. For Great Britain, it is a second straight attempt to win a first World Teams title. Germany are attempting to win their second after also winning in 2013. Get ready because the full match will be live-streamed on sportdeutschland.tv at 20:00CET on Friday 22nd November.

A trio of teams finishing on three wins and a loss, meaning that the decision on the Gold medal went to countback. Despite losing their final match against Germany, Germany’s earlier loss to the Czech Republic and Great Britain’s heavy win over the Czechs meant the British team have become +45 World Champions. It was a fascinating end to a tense category that saw all sorts of possible outcomes as the day progressed.

Germany ultimately finished in 2nd while the Czech Republic took the bronze medal.

Led by the talismanic Peter Sakovics, Hungary battled its way to the Seniors +55 World Title. A three-team shoot-out for the title left Hungary facing Germany and Great Britain. After Hungary beat Germany and Germany edged out Great Britain, Hungary only needed to win or suffer a small loss to lift the title.

The Hungarian team did win their final match, battling past the defending champions Great Britain to get their hands on the trophy late into the evening in Leipzig.

The only Seniors Team to retain their title, Denmark once again looked supreme. Steen Hesselbjerg and Graham Cain, the Danish pair, never looked in any doubt, destroying Finland before taking out Sweden in a hard-fought final.

Both will now turn their attention to the +65 singles where they are both through to the quarter-finals.

India’s debut in the World Team Championships had a fairytale beginning as they strolled past Austria 3 and Great Britain 4 to book their spot in the FIR Challenge Cup semi-finals. As well as the Indian fairytale, this group also saw the return of Martina Meissl, the Austrian returning to racketlon after a couple of years out.

In the semi-final, India will face the USA in a battle between two developing international nations. The other semi-final will see Austria 3 take on Germany 3.

Defending champions Great Britain 2 strolled relatively comfortably into the final as expected. They beat both Austria 2 and Switzerland 2 in impressive fashion. However, what was not expected was for Great Britain 3 to join them in the final.

GB3 – who did not win a match last year – produced two crushing wins over Czech 2 and the Netherlands before shocking the much-fancied Germany 2 to make it an all-British final.

There are plenty of players on those two teams who have played alongside each other before so this will be a fascinating watch for the large British contingent who have travelled to Leipzig.

Defending champions Finland looked hugely impressive on the opening day of competition, coming through their group with enormous ease. Joel Pennanen particularly stands out after winning one of his matches 33-3 overall.

Finland will take on France in the semi-finals after the French side produced a superb upset win over top seeds Great Britain. With Great Britain, Switzerland and France all winning one and losing one the group went to countback, with GB finishing in first and also reaching the semis. There they will meet GB2, who battled past a debuting Afghanistan team to set up another all-British match.

Best of the Singles Action

On another day dominated by the Teams events the singles once again took more of a back seat. However, the Seniors categories are advancing rapidly towards the final stages with a number of interesting matches throughout the day.

Defending +50 champion Richard Middleton saw his reign come to an end in the quarter-finals as he lost to countryman Simon Whale. No seeds now remain in the +50s with Whale facing Jack Brow Larsen and an all-German match between Thomas Knaack and Frank Bohm in the semi-finals.

Katrin Maldre’s quest to become the first American to retain a racketlon title is on track after she set up a Friday shootout with Carola Von Heimburg for the title. After both won their other two box league matches the winner of that match will take gold.

Ashutosh Pednekar earned another win on Thursday moving him into the +45 Singles quarter-finals where he faces Sweden’s Henrik Huldschiner. The +40 singles saw a thriller of a quarter-final as Uldis Dzirkalis edged Finnish No.3 seed Tommi Laine to reach the semi-finals. He’ll face Switzerland’s Nico Hobi with the other semi-final yet to be decided.

After toppling defending champion Anita Voelkel on Wednesday, Silke Altmann is just one win away from being crowned the Women Seniors +40 champion. Steen Hesselbjerg and Martyn Langston both kept their hopes alive of retention in the +65s and +55s respectively with Hesselbjerg in the semi-finals and Langston into the quarters.

Elsewhere, there will be a Dutch-British final in the Seniors +70s with Steve Rayson taking on Geoff Jordan for the crown on Friday. The First-Timers final has also been confirmed with Anders Messell taking on No.3 seed Andreas Ziemer.

You can recap everything that happened on day two in more detail by checking out the live text.